The Callisto Mining Company is a Canadian company operating Mine in the Northern areas of Canada. In 2005, the company found quartz ore in the Northwest Territories near the town of Marathon. This ore contains a high concentration of Gold, Silver,and Platinum. The mining of the ore started in 2007 after the construction of processing plants, administrative offices and twenty new homes in the Town of Marathon because of the employees of the company.

The company wants to earn a pre-tax profit on sales of 15%, however, as per 2014 operations, it has earned just 11.47% pretax profit on sales. This is mainly due to high operating costs, particularly for the supplies transportation from the nearby town and partly because some employees are paid high bonus to stay at the Marathon as there was no raid or rail link to the city from the nearby town of Forgo from where the supplies and food is brought into the city which is the closest link to the railway line. In summer, the transportation is done through a winter road build over the frozen Tundra and Lakes. In the summer, that winter road is no more available and so the supplies are made through float plane and helicopter.

Now there is an opportunity in the shape of a railway line and project from Forgo to the Marathon city. This would cost $90 million, half of which would be subsidized by the government because of the benefits it would bring to the community. This would eliminate the cost of Winter road as well as airlift and float plane. This would also bring positives for the local community for whom there would be new jobs and ease of commutation from Marathon to other parts of Canada, particularly to the Forgo which was previously tough and costly. That is the reason why it is expected that the government would approve the subsidy.

The Canadian Mining industry is one of the biggest mining industries in the world producing 60 minerals and metals and is ranks in the top five for the production of 13 major minerals and metals.  It employs over 403000 workers directly and over 193000 indirectly. It is also the largest employer of indigenous people in the country. “Canada has one of the largest mining supply sectors globally with more than 3,700 companies supplying engineering, geotechnical, environmental, financial and other services to mining operations.” Moreover, “Globally, Canada is recognized for its leadership in safety and sustainability. Mining companies in Canada were the first in the world to develop an externally-verified performance system for sustainable mining practices with the creation of MAC’s Towards Sustainable Mining initiative in 2004.” (Mining Facts)

So the mining industry in Canada is a highly competitive industry. Due to intense competition among the companies, every mine is very important for the companies and they need to get maximum profitability from whatever resources available. In this regard, the new opportunity of Railway Project between Forgo and Marathon is even more important.

The company’s operations are profitable.

The company has a positive impact on the communities and thus gets subsidies and cost-sharing from the government and local communities.

The company is not able to meet its target profit ratio of 15% before tax as a percentage of sales.

The company is prone to fluctuating prices of Gold and if the prices get too low, the profitability will further suffer.

Proposed Railway link between Marathon and Forgo can lower the costs significantly and increase its profit before tax.

The subsidy may not be approved by the government, in which case the Railway project may not be feasible at all.

The profit before tax would not reach 15% even after the completion of the proposed railway project after subsidy. 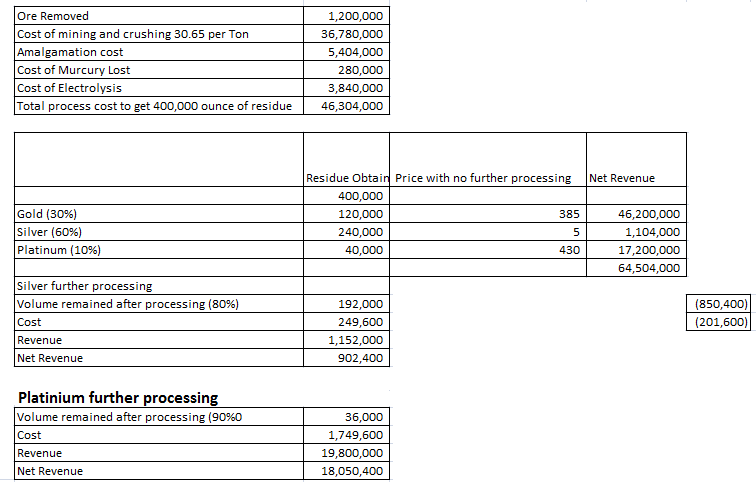 Considering that the company would not further process silver but would further process platinum, the profit and loss for 2014 at the Gold price of 385 are as follows. The average price of gold is used because its value is kept on fluctuating whereas the prices of Platinum and Silver are pretty much stagnant. This provides the company a return on sales before tax of 11.48% which is well below the 15% target figure. 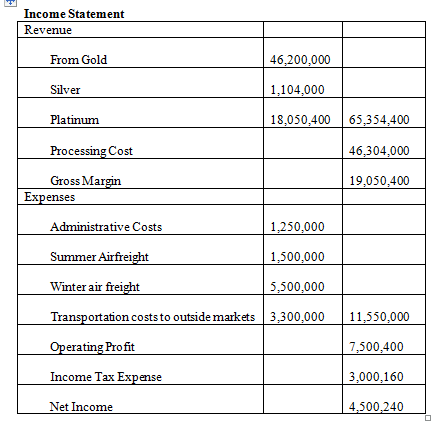 Analysis of the Railway Proposal

The proposed railway project is highly beneficial for the company provided that it is subsidized by the government. It would reduce operating costs significantly and would thus increase the profitability of the company significantly as well. The management is concerned greatly about the high costs of transporting supplies and personnel to the mine site and getting processed minerals to the outside market. The proposed railway will significantly reduce the costs to transport personnel and supplies to the mining site. Moreover, the company would also charge the residents of Marathon for freight and fare which would reduce the operating costs of train further. The finance is available at a 10% rate of interest. The case does not say whether the company can raise share capital or not so it is supposed that all the finance would be raised through a bank loan. The project will also bring capital allowances of 900,000 for the first ten years till the time when all investment on the train would get capital allowances. In the last fifteen years of the project life, the capital allowances would be $600,000 on the cost of the railway track. The depreciation would also bring significant tax reduction. Moreover, 25% of the administration cost would also reduce because CMC would not be paying isolation bonuses to some of its key employees.

It is evident from the above projections that at the initial cost of 45 million the project would generate a value of around $37 million for the company. So without subsidy, this project is not feasible at all.

The projected income statement for 2016 considering the railway project is in operation is as follow,

It is evident from the above income statement that the company would have to bear significant interest expense if it decides to finance the project through a bank loan. As a result, the profit after tax for the company from this mining operation would be well below the 15% desired before-tax profitability at 13%. However, the profit before interest and tax would be 19.9%. this means that if the company wants to earn its target profit of 15%, it should partly finance the railway project through equity finance as well.

The railway project is feasible only if the government provides subsidy and so the company should pursue it. However, if the project is totally financed with the bank loan, it would not result in fulfilling earning target of the company as the pretax profit would be less than15% as a percentage of the sales. However, if the part of financing needs is fulfilled through equity financing, it would significantly boost the profit and 15% earning target would be achieved easily because if we eliminate the total interest expense of the project, the results profit before tax figure becomes 19.9%. However, another way to look at this profitability is net profit as a percentage of sales which is 6.89% (4,500,240/ 65,354,400) in 2014 and projected to be increased to 9.19% (6,007,740/ 65,354,400) in 2016 which is a boost of 33%. So even if the project is financed through a bank loan, it is highly profitable to pursue it.

The project is highly beneficial to the community as well. This is because it would bring jobs and more financial stability for the community. Moreover, due to ease of communication, the life would also get easier at the Marathon and there would be easy for the people to commute to the Forgo and other parts of the country for education, business,and personal needs.

For railway project, the company needs to present the above-mentioned feasibility to the municipal town council, the Territorial government, and the federal government in order to push for the subsidy. The company also needs to emphasize the benefits the proposed railway project would bring to the financial and social wellbeing of the communities.

Then after approval of the subsidy, the company needs to hire an engineering company to build the railway track and make arrangements for buying the train and other equipment. The company also needs to make arrangements for the employees to operate the train. Ideally, the company should outsource the train running operations to some outside railway company as apparently, it has no prior experience to run a train. It needs to focus on its core activities of mining operations only.